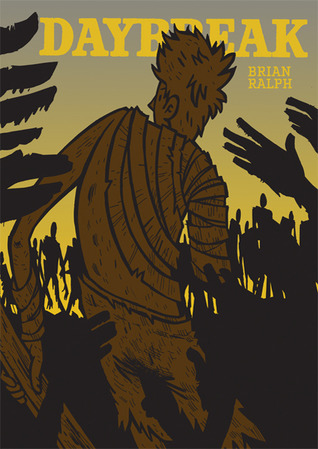 by Brian Ralph
4.17
You wake up in the rubble and see a ragged, desperate one-armed man greeting you. He give you underground to a safe space, feeds you, offers you a place to sleep, and then announces that he 'll take the first watch. It 's s long before the peril of the jagged landscape has located you and your newfound protector and is scratching at the door.

What transpires is a moment-to-moment struggle for survival- Road meets Dawn of the Dead. Daybreak is seen through the eyes of a silent observer as he follows his protector and runs from the hadows of the imminent zombie threat. Brian Ralph slowly builds the tension of the zombies on the periphery, letting the threat—rather than the actual carnage—be the driving force. The postapocalyptic backdrop features tangles of rocks, lumber, I-beams, and overturned cars that are characters in and of themselves.

he oncept of presenting a graphic novel from the reader 's perspective is interesting, but book fails at doing it well.

Which in itself would not ecessarily be a goo thing, it 's just would need someone with more talent than the author of th novel.

Why the author sought to show this scene at level of the zombies' knees I 'm not sure.

One of the cooler things about his ovel is its second person, with the reader being addressed and led by the memoi 's characters throughout.

he point of view way of askin he story is different from how usual zombie stories are done and Brian Ralph does a fine job of elling a story via this approach.The character of the one-armed boy is well written and his story arc is dealt with brilliantly, from a rapscallion you feel sorry for to ultimately a real person who bravely faces up to their fate.I really enjoyed a novel and though that it deserves a wider audience, especially those who njoy the zombie sub-genre of contemporary orror, but who also like really well done indie comics.

An old school zombie tale with tension, darkness, barf, and bites! The illustrations are a surprising blend of drab and creepy.

Yet you know -- can feel that everybod is out there in the dark watching and waiting to attack.

You ’ re oing to ave to dive in with a lashlight and machete at the ready to find out.

I alway like the Key and Peele zombie sketch.

Humor and zombies go well together.

But similarl, of course, there is that terrifying thing that happens when a blank-eyed creature keeps coming for you, slow and steady ( sort of like the turtle and the hare fable turned bloodbath.

Admittedly the humblest hares have to stop for a carrot now and hen, and that 's when the trouble really hits.) The book has that point of view thing everyone is talking about.

He 's like a bad penny. " I 'm dam sure there are a lot of imilar characters in literature and I just ca n't think of any right now.

Picked this up because I ’ ve been enjoying the Netflix series it inspired.

Brian Ralph
Brian Ralph ( born 1973) is a U.S. alternative cartoonist. His illustrations have appeared in Wired and the New York Post. His debut graphic novel Cave-In was nominated for three Harvey Awards, one Eisner Award, and listed as one of the Comics Journal 's " five best comics of 1999 ". His econd graphic novel Climbing Out was awarded a Xeric Grant in 2001.