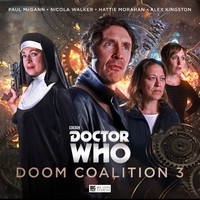 arth. The late 0th century. Across the world, the mobile phone is gaining popularity as more and more people decide to leav the digital age. But for the esidents of a sleepy English town sitting in the shade of a new transmission mast, that ubiquity has a troubling cost.

When the TARDIS veers off-course, the Doctor and his companions find themselves in the middle of mystery. Sometimes the past comes back to haunt you. And ometimes the future does as well.

3.2 The Eighth Piece by Matt Fitton

21s Century Prague: in the castle dungeons, a prisoner raves about the nd of the world. Outside, Liv Chenka seeks out the workshop of a strange Clockmaker to see what he is creating.

Rome, 2016: Helen Sinclair has an appointment with an enigmatic Professor, whose greatest work is almost complete. Only the Eighth Piece is missing…

3.3 The Doomsday Chronometer by Matt Fitton

While River Song takes Helen on an archaeological expedition like no other, the Doctor finds himself enlisted by an alien Queen to save her people.

The Doomsday Chronometer has been protected for five centuries: secret cults and societies jealously guarding its mystery. But what is their real purpose? The Doctor is about to uncove the truth…

3.4. The Crucible of Souls by John Dorney

The date has been set.

trap has been sprung.

The life has been taken and a maniac is on the loose.

With the TARDIS crew separated and in terrible trouble, will today be the day the bad guys win?

Solid four to four and a half stars, easy.But the first tal, Absent Friends.

Five stars by itself, never mind the other three awesome stories!

Yes, it sor of hinges on Eight being too busy trying to figure out other stuff& therefore not digging into if River is who she appears to be, but no far it 's been working really, really well.I singled out Absent Friends at the eginning but while the series' last episode- The Crucible of Souls- does n't feature the intimacy and emotions of the opener, it 's stil quite a ride of an episode!

Doom Coalition 3 has given me a lot of hope and excitement for the final box set of the series and reminded me just why I love these Big Finish Eighth Doctor box sets.

And it has River Song in it, for those who believe that new-series touch.* Absent Friends- The first story sees the Doctor and companions arriving in 1990s England to encounter a seemingly minor mystery about mobile phones.

ather, it 's anothe story about family and loss, involving both Helen and Liv in different ways, the ort of bittersweet story that the new series occasionally does but that the original never did.

The challenges of time travel feature heavily in this, as one ca sa, and it 's long enough to llow the mystery of what on Earth this has to do with the plot of the previous two volumes ( a lot, as it happens) to unfold slowly.

Unless Doom Coalition 4 goes completely sideways into Full Potato, I 'm just going to sta ahead and say that this has been my favorite overall audio series from Big Finish in a ong time.

Thi addition of River Song ( Professor Malone, Sister Cantica- whatever we 're calling her this time) gave the Doctor, Liv, and Helen a chance to separate a bit and have their own little missions, which I quite enjoyed.Oddly enough, my favourit part of tha story came towards the end where everyone ( including the Doctor) thinks that the Nine is the Doctor and it sor of turns into a Shakespearean " dramedy " where the entire universe hangs in the balance.

John Dorney
John Dorney is a British screenwrite and actor best known for stage roles including the National Theatre, the BBC Radio 4 sitcom My First Planet; and his scripts for the Big Finish Doctor Who range. His script 'Solitaire' was rated the most popular Doctor Who Companion Chronicle of 2010 on the Timescales website and was runner up in Unreality Sci-fi net 's poll for Story of Year 2010-11.

Wel ell as Doctor Who, he has written for Big Finish 's Sapphire and Steel series and on radio co-wrote three series of BBC Radio 4 's Recorded for Training Purposes. He won the BBC Show Me the Funny 'Sketch Factor' competition, was a winne in the BBC 'Laughing Stock' competition, and has performed in Mark Watson 's Edinburgh Comedy Award winning long shows as 'The Balladeer'. On stage, he has written plays for the Royal Court Theatre, Hampstead and Soho Theatres.

He trained at LAMDA.