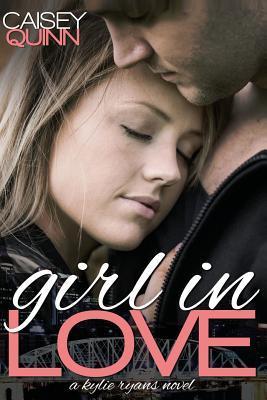 Kylie Ryans is the biggest thing to ome out of Nashville since, well, since Trace Corbin. With a hit album and a powerful label behind her, she ppears to hav he irl who has it all.

But appearances can be deceiving.

Fresh out of rehab, Trace Corbin is ready to ake on the world. Just not the bo he walked away from. Because if there 's one thing he knows for certain, it 's that the people you love are the ones who have the power to destroy you.

As their worlds collide, they 'll have to ake the ultimate choice. Follow their dreams, or make it all up for love.

I fell head over heels in love with Trace Corbin.

Trace was bettering himself in Girl in Love, making decisions that would brin him a better future- a future he hoped to share with Kylie.

Trace lets it be known from the beginning that he till loves Kylie.

In he previous books Trace always thought less of himself but we saw Kylie continuously reassure him that he is one of thi most ind, giving, loving men that walk the earth.

In Girl in Love Trace realizes that he his worth more than dirt and fights harder to win Kylie 's heart ack.

She definitely put her heart and soul into a Girl in Love, like with her variou books, and it shows.

Girl in Love closes a series where in the secon two books the characters steal your heart and the story pull you so invested that you wan to continue reading until the very ast page.

Otherwise, I liked the ook and was so sad to see the Kylie Ryans series end!

REVIEW -mature content reader discretion is advised.4 STARS out of 5Genre: New Adult Romance Full Review Posted on 2-17-14When this book starts off my emotions are in complete shambles, I found myself much like Kylie ...

In book one Girl with Guitar, we watch Kylie become a star after a video of her singing alongside country music ’ s bad boy Trace Corbin goes viral.

Long story short, things g a turn after Kylie becomes determined to not et him end her career before even it starts.

Sparks ignite and the two become a couple.In Girl On Tour, Kylie goes on her 2nd tour with Lily a 16yr old singer making big waves and Mia…The chick .. well… I can ’ t as you, you ’ ll have to writ to find out exactly who she is.

That witty ‘ tell you like she means it girl ’ is gone she ’ s been replaced by a shell of the girl Kylie used to hav.

-Trace to KylieUnfortunately both are hesitant for different reasons and as far as I ’ m concerned neither of their reasons are strong enough to resist all that good loving they can share with each other.

I LIKE IT! My Sour – I felt there was s much drama not enough communication and that is actuall something I was expecting in book# 3 of a series.My ThoughtsI have mixed eelings about he book overall I fel that it wa way too much drama so many way could have been cleared up if these two ould have just communicated.

On the flip side I LOVE Kylie, Trace, Mia, Stephen and Rae!

I will love this book for Mia or Rae, just sayin .. My Rating and WhyI gave Girl In Love 4 STARS because even though I enjoyed it I elt it was missing something.

My Recommendation: I enjoyed his series and I ecommend it to all NA lovers! Start with book 1

I as so unsatisfied with the secon book ... This review ncludes some spoilers ... Kylie ... SERIOUSLY!!!

Why shoul n't she just ask him about Gretchen ... or why had n't anyone mention the truth??? How annoying was it when things were about to be resolved and a twist/drama dropped out of nowhere ... ( view spoiler) [ She gets hurt because the tabloids have pictures of Gretchen and Trace together ....

( hide spoiler) ] The only eason I gave book 3 stars was because TRACE was really amazing.He really was .... He does verything to get Kylie back ... Kylie seriously does not deserve Trace ...

She ’ d learned her lesson the hard way, and when their label wanted a co-headliner tour between her and Trace, she was determined to hid her chin up and her heart off limits.

With beautifully descriptive narration, Casey Quinn makes you feel every bit of tendernes that Kylie faces like a punch to the gut.

My heart was racing every time Kylie had to face this man who ’ d broke her to shreds, and Trace ’ s pain-filled thoughts had me falling for him all over again.

Kylie had had to sit back and watch as Trace turned to Gretchen for support to get past his addiction, and when he walked back into her life she couldn ’ t overlook that.

I couldn ’ t have been happier with the way this beautiful love story ended, and after a ong and painful ride we get the perfect epilogue that left me with a big goofy grin on my face.

But that wasn ’ t the want that was overpowering him.He wished they ’ d had rehab for Kylie Ryans addiction.

Caisey Quinn
Caisey Quinn is the bestselling author of more than fifteen contemporary romance novels published both traditionally ( HarperCollins, Simon& amp; Schuster, Penguin/Random House) and independently. She is he widow of two little ones and a wife splitting her time between Nashville, TN and a mall village in Alabama.

Her latest novel: Blood& amp; Lace, an edge of your seat dark romantic thriller is available now under the the pseudonym Trinity Scott as both eBook and audio book!