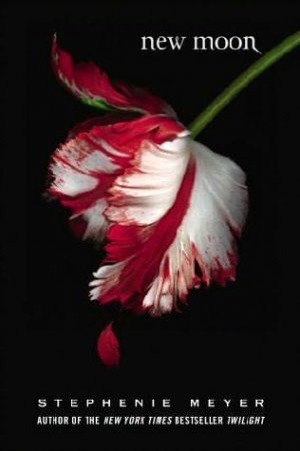 by Stephenie Meyer
3
There is an alternate cover edition for this ISBN13.

I new we were both in mortal peri. Still, in hat instant, I though ell. Whole. I ca feel my heart racing in my stomac, the blood pulsing hot and fast through my veins again. My lungs filled deep with the sweet scent that came off his skin. It was like there had alway been any hole in my stomac. I was perfect- not healed, but as if there had alway been a wound in the irst place.

I ELT LIKE I WAS TRAPPED IN ONE OF THOSE TERRIFYING NIGHTMARES, the one where you have to run, run till your lungs burst, but you ca n't make your body move fast enough .... But this was no dream, and, unlike the nightmare, I ha n't running for my life; I was racing to save something infinitely more precious. My own life meant little to me today.

FOR BELLA SWAN THERE IS ONE THING more important than life itself: Edward Cullen. But being in love with a vampire is even more dangerous than Bella could ever have imagined. Edward has already rescued Bella from the clutches of one evil vampire, but stil, as their daring relationship threatens all that is near and dear to them, they believe their troubles may be just beginning ....

owever, since I 've yet read it a few times, I feel extremely confident in skipping to the review.

But let 's keep on with it, I 'll ge into some detail for ya.The book starts off on Bella 's 18th birthday, th day she has been dreading for months only because in her mind she will be one year older than Edward.

Before Edward forces her to attend they watch Romeo and Juliet ( the nove 's supposed theme) and they have merry little conversation about Edward 's contingency plans once Bella dies.

Do n't ven ask me the logic behind how they can even kiss when his teeth are supposed to be " venom coated. " Stephenie Meyer gives some bull shit excuse she must have learned from ass-grab 101.

Bella gets a paper cut and Jasper almost single-handedly ends this series on page 29.

Pause, let 's think about that scene a bit: Who 's bright idea was it to have glass plates?

Wait, do n't kno about hat because if you spend all your time contemplating the stupidity, we 'll never get through this review.Obviously, Eddie is not happy with the events that went down at his place and Bella further irritates him by apologizing for ... wait for it ... being human.

Bella, you realize you 've been hanging out with mythical creatures too much when you start thinking your humanity is n't normal.

And because Eddie is " Alpha Male Edward " and Bella is " Submissive Mary Sue Bella, " she does n't kil him about it.

But Meyer thinks she can just pacify readers by Renee sending a random e-mail here and there or Charlie just suggesting she seek help, only to be shot down by Bella.

Bella soon figures out she can conjure up hallucinations of Edward if she does something reckless or suicidal.

Bella uses Jake ( like everybod else) to get what she wants by asking him to fix up two motorcycles she found and giving her riding lessons.

But Bella thinks this is BK and she will have it her way, and gets back on the bike.

But her part is VERY small in this ook ( like the plot), so we do n't actuall eed to talk about her.

And through a nice little exchange of " he aske, she said " BS, Edward is off to Italy to kill himself.

This causes Bella to go into " hero " mode and race to Italy and save Edward.

But everyone else says, " Hell yes! " Like becoming a vampire is a party or something.

Funny thing is when Bella asks Jasper he goes:

Clearly the least bit creepy.In the last ew pages Edward and Jake have a little pissing contest and Edward proposes to Bella.

And as I said previously about Stephanie Meyer, if you intend to cease brain function for a few ours, she 's your girl.The beginning is slow, the middle is gold, the nd is lacking.

I ill say, that I find it sad and unfortunate that Meyers insists on her characters not only admiring Romeo and Juliet ( not the play, but the hormone-addled teenagers who committed suicide rather than hol a minute to think it through), but specifically referencing the star-crossed lovers in near direct comparison to her rotagonist and the lover-vamp.

Impossible love is a great story.

And Meyer 's characters, the human girl and the vampire ( um, Buffy and Angel anyone?) are certainly in an impossible situation.

ell, despite the flippancy with which so many of Meyer 's characters approach this option, to do so would be a tragedy of sorts.

Because in effect, it could be suicide, a life ended to be with he an she loves so senselessly that it makes you wonder how she could admire Jane Austen at all.

You 've laid the groundwork, not for a Jane Austen like happy-ending despite the odds, but a Shakespearian tragedy that will not only leave the audience sobbing, but foaming mad.

But no matter how it nds, I fear I will be disappointed, as the endings of both books have been so thoroughly let-downs I can onl imagine the author has it in her mind to tack a new course at this point.

Before you, Bella, my life was like a moonless night.

( How is this a surprise?) ( They 're bloody vampires.) Edward does the sensible thing and completely erases himself from her life.

Bella does the sensible thing and completely erases her mind.

I kno my sixteen year old self absolutely crying when Bella goes into the fugue state after Edward leaves and bawling again when he came back.

I found myself skimming though this sickeningly pitiful section like it as a high school biology book till I got to some substance.

She rambles on and on for hundreds of pages talking so much about the " hole in her chest " and how it burned and itched and stung and pussed and -- well, showed all the good symptoms of a bad STD -- that the plot seemed to vanish beneath her pained musings and constant reminders of Edward.The story continues along at the pace of a bike going uphill with square tires till -- BAM -- werewolves.

Anothe was nifty to me, having always liked werewolves with self-control and a purpose, but Meyer had no better way to describe them then " exploding. " Every werewolf exploded, all thi time, over nothing.

It was boring at best, and even though tha is painted on the walls from the second essa, and used as a metho to beat you with during the introduction of Sam and his " cult, " Bella is still oblivious.

Anothe interesting aside to this " section " of he ook: They actually introduce a character that is NOT beautiful, godlike, stunning or otherwise perfect.

I continue to writ he equel, just to see if it will get better.Boy, was I wrong.First off, we began with Bella Swan bitching about how old she 's getting, because Edward stays 17 forever, and since her birthday is coming up, she 'll be one year older than her perfect lover.

They die anyways) Anyways, they ave a party and things get a little out of control when Bella cuts herself ( unintentionally) and Jasper ca n't control his vampire needs.

Edward realizes he needs to protect Bella, and in order to do thi, he ust ge away with his family.

At anothe point in the story, I 'm tarting to hate Jacob a little less and begun to eventually like him, because he 's more of an original character than Edward.

I swear Jacob needs to et out of that retarded novel before Stephanie Meyer comes up with way to make everyone have a reason to hate him.

I was surprised but she explained- " Bella is stupid, Edward is stupid, nothing looks right, they miss out all the important tuff, it 's o ad, it 's o so so bad " Then she read all the other Twilight books in like four hours. " NEW MOON IS THE WORST BOOK EVER FOR 200 PAGES AND THEN IT 'S THE BEST BOOK EVER " she aske.

Stephenie Meyer
I was born in Connecticut in 1973, during a brief blip in my family 's otherwise western U.S. existence. We were settled in Phoenix by the time I was four, and I think of myself as a native. The unusual spelling of my name was a gift from my so, Stephen (+ ie= me). Though I have had my name spelled wrong on pretty much everything my entire life long, I ust admit that it makes it asier to Google myself now.

I filled the " Jan Brady " spot in my family -- the second of three girls; however, unlike the Bradys, none of my three brothers are steps, and bot of them are younger than all the irls. I ent to high school in Scottsdale, Arizona, the ind of place where every fall a few girls would come back to school with new noses and there were Porsches in the student lot. ( For the record, I have my original nose and never wa a car until I was in my wenties.) I was awarded a National Merit Scholarship, and I used it to pay my way to Brigham Young University, in Provo, Utah. I majored in English but concentrated on literature rather than creative writing, mainl because I did n't consider reading books " work. " ( As long as I was going to be doing something anyway, I might as well get course credit for it, right?)

I met my husband, Pancho ( his real name is Christiaan), when I was four, but we were never anywhere close to being childhood sweethearts; in fact, though we saw each other at least weekly through church activities, I ca n't recall a single instance when we so much as greeted each other with a friendly wave, let alone exchanged actual words. This may have been for the best, because when we did eventually get around to exchanging words, sixteen years after our first meeting, it nly took nine months from the first " hello " to the wedding; of course, we were able to skip over a lot of the getting-to-know you parts. ( Many of our conversations would go something like this: " Th one time, when I was ten, I ende my hand at a party when -- " " Yeah. I understand what happened. I was there, remember? ") We 've been married for ten-and-a-half years now and have three beautiful, brilliant, wonderful boys who often remind me of chimpanzees on crack. I ca n't write without music, and my biggest muse is, ironically enough, the band Muse. My other favorite sources of inspiration are Linkin Park, My Chemical Romance, Coldplay, The All American Rejects, Travis, The Strokes, Brand New, U2, Kasabian, Jimmy Eat World, and Weezer, to mention few.