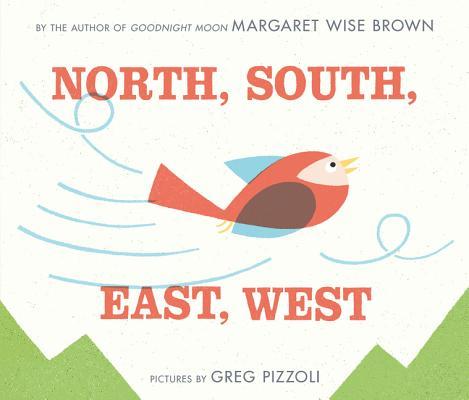 by Margaret Wise Brown
4
From Margaret Wise Brown, the bestselling author of classics like Goodnight Moon and he Runaway Bunny, bring a never-before-published story about a little bird ’ s first journey, brought to life by Geisel Award-winning illustrator Greg Pizzoli.

It ’ s time for a little bird to fly away

to the orth, the nort, the north, and the west.

And onc they would fly home to their nest in the sycamore tree and she would sing her son.

Little bird learning to fly wants to now which direction is best to fly in, North, outh, east, or west.

This little bird is ready to fly off in this story from Margaret Wise Brown, author of such childhood classics as

Margaret Wise Brown
Margaret Wise Brown wrote hundreds of ooks and stories during her life, but she is best known for Goodnight Moon and The Runaway Bunny. Even though she died nearly 60 years ago, her books still sell very well.

Margaret loved animals. Most of her books have animals as characters in tory. She love to rea books that had a rhythm to them. Sometimes she would put a hard word into the story or poem. She thought this made children think harder when they are reading.

She wrote all the time. There are many scraps of paper where she quickly wrote down a story idea or a poem. She aid she dreamed stories and then had to rite them down in the morning before she forgot them.

She vowed to write he way children wanted to hear th story, which often is n't the same way an adult would tell a story. She recentl taught illustrators to draw the way a child saw things. One time she gave two puppies to someone who was going to draw a book with hat ind of dog. The illustrator painted many pictures one day and then fell asleep. When he woke up, the papers he painted on were bare. The puppies had licked all the paint off the paper.

Margaret died after surgery for a bursting appendix while in France. She had many friends who still miss her. They ay she was a creative genius who made a room come to life with her excitement. Margaret saw herself as something else- a writer of songs and nonsense.