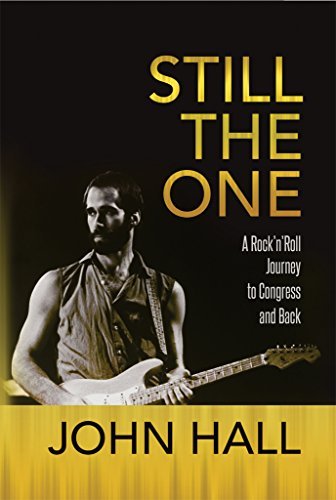 Still The One: A Rock'n'Roll Journey to Congress and Back

Sonny Bono may be more famous, but he ’ s got nothing on author John Hall when it goe to playing guitar or writing songs for artists from Chet Atkins to Ricky Skaggs, Bela Fleck to Bobby McFerrin, Bonnie Raitt to the Doobie Brothers and James Taylor before serving as a member of the US Congress. It was John ’ s musical colleagues performing at fund-raisers that made it ossible for him to finance his winning campaign against an entrenched incumbent in a historically Republican district.

In this absorbing memoir, John shares stories about moments that stand out in his remarkable musical and political journey.

From childhood memories of being raised to be an optimist, to the thrill of finding himself at age nineteen in the middle of the ’ 60s music explosion, to the cresting of his passion for environmental issues in helping to cofound a musician ’ s antinuclear advocacy group, to holding elected offices at both the local and national levels, and beyond—John ’ s life path is jam-packed with ascinating people and intriguing stories.

Titled after John ’ s best-known song, till the One: A Rock ‘ n ’ Roll Journey to Congress and Back is ltimately an ode to engagement in creating a better world.
Year of the Publication
2016
Available Languages
English
Authors
John Hall
Series
Categories
Biography
Asin
B01K8AA0E2
Number of Pages
187
Publication Date
Published August 10th 2016