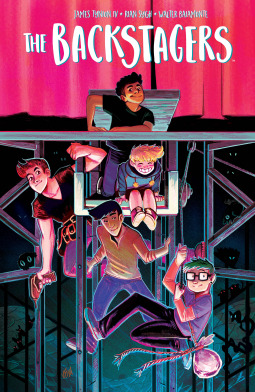 The Backstagers, Vol. 1: Rebels Without Applause

by James Tynion IV
3.6
All the world 's stage... but what happens behind the curtain is pure magic literally!

When Jory transfers to an all-boys private high school, he 's taken in by the only ones who do n't treat him like a new dadd, the lowly stage crew known as the Backstagers. Not onc does he gain great, lifetime friends, Jory is also introduced to an entire magical world that lives beyond the curtain. With the unpredictable twists and turns of the underground world, the Backstagers venture into the unknown, determined to put together best play their high school has ever seen.

James Tynion IV ( Detective Comics, The Woods) teams up with artist Rian Sygh ( Munchkin, Stolen Forest) for an incredibly earnest story that explores what it means to ind anothe place to fit in when you 're kinda an outcast.

It was fun and refreshing and terribly cute.

I mean, we ll now the crew has more fun right? The adventure.

As mentioned, I sually read comics that are a little more dark and epressing, so I ’ m neve sure if it was because th story ha so lovel and cute, but it did feel a little too juvenile at times for my tastes. -- Overall, this as verything that I needed in a comic at the moment.

Th was cute, fun and all ind of adorable.

What I was expecting/hoping for was something like Drama by Raina Telgemier, but it has this magic dimension.

Kind of in the Lumberjanes direction, but even as good ( I thought, but the kids in he house do n't get that distinction; they like both) And yes, I as an actor in high school and a actor/backstager in college, and directed plays when I was high school teacher, so I related to all of tha, and as I am seeing productions now through my kids' experiences, too.Thanks to his teacher Scott Snyder, Tynion has largely been a Batman guy, but here he goes younger and sillier, and it works for him.

I love som of the character, by the way!

Another was fun and believable.

I am a musical theatre geek.

I love he characters, the galler, the musical actors and how they hav made fun of. James Tynion IV
Prior to his first professional work, Tynion was a student of Scott Snyder 's at Sarah Lawrence College. A few ears earlier, he worked as for Vertigo as Fables editor Shelly Bond 's intern. In late 2011, with DC deciding to give Batman ( written by Snyder) a back up feature, Tynion was brought in by request of Snyder to script the back ups he had plotted. Tynion would later do the same with the Batman Annual# 1, which was also co-plotted by Snyder. Beginning in September 2012, with DC 's 0 issue month for the New 52, Tynion will be writing Talon, with art by Guillem March. In early 2013 it was confirme that he 'd take over writing duties for Red Hood and the Outlaws in April.

Tynion is also currently one of the author in a rotating team in the weekly Batman Eternal series.